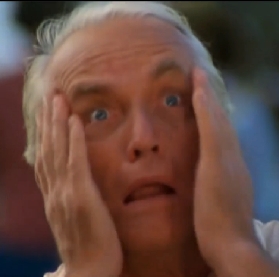 You may remember the classic 1980 movie Caddyshack with greats like Chevy Chase, Rodney Dangerfield, Bill Murray and Ted Knight, but do you know what it can teach a private investigator about mobile surveillance?

The explosions are huge, and one explosion in particular is a gigantic fireball, but here’s what you may not know…

The golf course was a landmark that pilots would use to line up for landing at a nearby airport. When the explosion scene was filmed, an incoming pilot radioed the control tower to report the explosion as a plane crash!

While I refuse to “armchair quarterback” the pilot, there are many, many things more likely to cause a large explosion on the ground besides a plane crash. I mean statistically it’s just not likely. However the pilot was intently in his own world (landing a plane) and so he interpreted the explosion within that framework.

That’s a natural, human tendency. We all do it.

But, here’s what I want you to watch out for…

When you’re working a case (eg. a skip trace, background check, surveillance, etc.), make sure you don’t project your own motivations and judgments into the subject’s mind.

Use your training and experience, but don’t presume the subject sees things from that same perspective!

Remember, the subject of your investigation probably doesn’t have the same experience and training as you!

For example you may have already read my special report If You Want To be a Private Investigator Give Up… Unless You Do These Three Things. If not, you can get it right here…