In this week’s video I share with you a dirty trick for how to get someone to talk to you during an interview even when their lawyer has told them not to talk to anyone and it’s a technique I originally taught in my Best Selling book 51 Dirty Tricks Bad Guys Really Hate.

Really this is a trick about how to get people to do things (without them knowing) you need them to do to help you with your case. And if I had to sum it up in one word, that word would be : Influence.

Books have been written about how to influence others and there are tons of videos online teaching you that – at least in theoretical terms or with example that are unlikely to help you in the real world. What I have for you here is both tactical and practical for any private investigator whose conducting an interview with a subject when the subject says, “My lawyer told me not to talk to anyone about this”.

Warning: Do not take this tip lightly.

What you are about to learn works and it works almost like magic.

If you say the words, your subject will begin talking to you.

You will get their version of what happened. You will get what they will testify to in court (before they take the stand!) and you will generate leads that will make your client think you’re psychic!

Here’s What To Say

When the subject you’re questioning says, “My lawyer told me not to talk about this to anyone”, you say, “That makes a lot of sense. Let me ask you this, do you have any questions for me about the case?”

Usually it’s something like one of these typical responses…

In my experience it’s usually some form of a “why” question and never about something practical, like when the court date is or where to park for the upcoming deposition.

I never answer their question(s). I always pretend to be surprised saying something like, “They never told me that!” or “That’s not the story they told me!”

This subtly says to them, I’m someone who they need to convince of their story because “the other side” has tried to convince me of their version! This works like a charm.

Learn my tricks, use them wisely and take action to set yourself in the Top 10% of professional investigators!

P.S. – Don’t miss my book 51 Magic Phrases to Get What You Want: The Secrets of Instant Influence for Private Investigators, Process Servers, Security Guards and You! 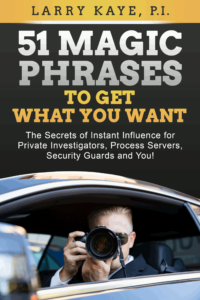