We all make mistakes sometimes so I couldn’t get too bent out of shape when I recently learned some of my brother and sister First Defenders (and even some cops) are making the mistake of wearing their body armor backwards!

I guess it’s better than not wearing any ballistic protection, but come on… the front panel has a little “v”-like notch.

If you put on your vest and it goes straight across from collar bone to collar bone without the little dip-down part… then you got it on backwards!

Committed to your success and safety,
Larry Kaye, P.I.
and Best Selling Author

P.S. – Be sure to check out my latest book 51 Weird Private Investigator Tricks That Actually Work: How to Trick, Track, Find and Follow Someone Like a Pro

I got this comment about the video I posted on wearing body armor backwards:

“It’s 2019, who still aims for mass before face in a time with 99% accurate red dots on carbines and hand guns? Every range I hit up it’s all head shots all the time. Check out gun fight videos on YouTube, training has changed. I was trained with the knowledge that I stood a 67% chance of taking at least one round in any gun fight. That vest you have on is probably a level 2 and will only stop a 9mm or smaller round. Best solution, avoid any and all confrontations. There is no reset button on life, why blow it away for a paycheck? I love my desk job.”

He ask, “Who still aims for (body) mass”? My answer… Pros! Plus, plenty of street hoods and untrained, shaky others squeeze off rounds everyday. Wear your vest.

He ask what good is lower rated body armor. My answer… Better than nothing! I was trained anything that can slow down a round before it hits you is helpful. That’s why you seek cover even if it will “only” stop handgun rounds.

He says, “There is no reset button on life”. My answer… I suspect I know that better than him.

He says, “Avoid any and all confrontations”. My answer… Who has that luxury? If you do it’s probably because someone else is willing to step-up and deal with it for you.

He ask, “Why blow (your life) away for a paycheck?” My answer… I don’t risk my life lightly and when I do it’s for a higher purpose than a paycheck. I understand the desire to sit safely at a desk job, but anyone who’s “been-there-and-done-that” to help others probably understands the immortal worlds of Judge Smails…

When you have to testify in court as a private investigator, how can you refer to your notes without opposing council entering them into evidence to pick them apart and try to use them against you?

If you’re working a case and a law firm is your client, then ask that attorney what they want you to do.

But if you don’t have that kind of direction, consider the little trick I use.

I witnessed a strong-arm robbery while I was doing surveillance.

I was the only one who got the license plate number and I had the video, of course so, naturally, the prosecutor’s office called me to testify on this.

Side Note: Just so you know – and this is how it goes in real life – although this was initially a Strong-Arm Robbery, by time it made it to court the charges had been reduced to simply Theft. If you haven’t experienced working criminal cases, don’t be upset when this happen on your case. That’s just the way it goes.

Back to the case…

I had notes with me about the crime. I wanted to make sure that I got everything accurate, including the license plate number, the vehicle description, what time it happened – those types of things.

As you know, you can be called to testify months or sometimes a year or more after you do surveillance or after you witness a crime. You want to be accurate so you might have your notes with you. I did in this case.

In this case my notes were just things like where the theft happened, the license plate number, date, time and whatnot.

Here’s how your notes can be used against you…

What don’t want when you have notes with you is for opposing counsel, or in this case the criminal defense attorney, to say, “Well, you’re referring to your notes. Let me see those notes.” Then for him to look them over and say, “You know your honor, I’d like to enter these into the record.”

Now, all of your notes are part of the evidence that can be picked apart!

They might say, “Well look, you scratched out something here. What did you scratch out? The first license plate number you wrote down… why were the last two digits were reversed? Why did you change that? Which one is really wrong?”

They can have a lot of fun picking apart your notes!

So here’s a trick I used to try to keep them from entering my notes into the record. In this particular case, if you flip over my page of notes, you’ll see I wrote them on the back of a print-out of the defendant’s previous arrest!

The defense attorney will look at these notes, if he chooses too, decide maybe he’s interested in what I’ve written down, but when he flips the page over, he’s going to see his client’s (the defendant’s) criminal history printed out, and there’s no way he’s gonna’ want that entered into the record!

In this particular case, here’s what’s on there: 1 count of Aggravated burglary. 2 counts of Kidnapping and 2 counts of Rape.

Does he want this stuff entered into the record? No Way!

The print out also included all the case numbers, dates and other specifics of his crimes (but no victim’s information, of course).

Can you imagine how happy the Prosecutor would be to have all of that criminal history entered into evidence by the defense attorney?!?

So, when the defense attorney sees his client’s criminal history listed in detail, he’s going to be very reluctant to want to pull my notes and put those directly into the record.

Warning: I’m not an attorney and I can’t say that this is one hundred percent foolproof and that the defense attorney wouldn’t enter them into the record anyway. But it’s a precaution that I’ve taken over the years just to make the defense attorney take that second thought about trying to jam me up with my own notes. It’s nice to have that one extra layer of protection in place, just in case.

This trick comes right out of my latest book, it was just released. It’s called 51 Weird Private Investigator Tricks That Actually Work: How to Trick, Track, Find and Follow Someone Like a Pro.

This is just the first of many dozens of tricks I teach there. I’d love it if you go over there to Amazon and check it out. At least peruse through the free portion you can read online.

If you’re on my email list, then you already got a sneak preview of a different chapter.

By the way, if you want to be on my email list, I do have a free report over titled: If you want to be a private investigator, give up unless you do these three things. If you’ve read this far, that report will definitely be off interest to you and then you get updates, tricks and info like what I shred with you here.

You can get the special report it right here…

P.S. – Be cautious of people who promise to give you results in your life they haven’t actually created for themselves! By that, I mean people who want to teach you things, but they’ve never been-there or done-that. They’ve never done it in the real world.

I am living proof of the tricks in the book Fifty-One Weird Private Investigator Tricks That Actually Work!

I have used them and I’ve had great success with them over the years. you’re going to find plenty of tricks useful in your life out of the dozens I teach there.

How do you find a landlord when they own multiple rental properties and how do you know which on they actually live at?

The trick is to look at where the tax bill is sent.

Many landlords who own property in their name (as opposed to in a corporate name) have the tax bill sent to the address they own and actually live at.

Super-simple, but truly effective tip to save you from driving all over the county when you are trying to verify the address or serve process.

If you absolutely need to see the 60 second landlord skip tracing video for this week, it’s posted.

P.S. – Don’t miss my special report titled… If You Want To be a Private Investigator Give Up… Unless You Do These Three Things. You can get it right here…

Here’s one key on your computer keyboard that you’re probably not using that will greatly increase your success as a private investigator when you’re using Open-Source Intelligence (OSINT) for a case your working.

That key is the “pipe” key.

On most keyboards you can find it above the “Enter” key.

On some keyboards I’ve seen it all the way to the left next to the “z” key. 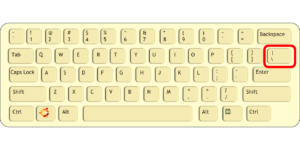 I discourage the use of google if at all possible. It is a HUGE privacy suck that follows (and records) you everywhere – both figuratively and literally.

However… you can perform some specific searches using the tools they have and get some amazing results. Sometimes this is called “google hacking” or “google dorking”.

If you want to search a specific website for a word (rather than searching the entire internet for that word) you can use the “site:” command.

You can search an website for all the times the word “walrus” is used if you format your search on google in this way:

Obviously, change “example.org” for the website you want to search.

But let’s take it to the next level.

Say you want to find all sorts of pdf documents on a website. And maybe all the power-point presentations. And the excel spreadsheets. You can do that with this “site:” command and the “pipe” key.

Look at this command…

Note it is searching the site example.org for all files with the extension (ext:) for word documents (doc), excel documents (xls), etc.

But use the “pipe” key in-between each file extension search.

I will leave it up to your investigator’s mind how to use this on you cases, but it can be handy.

Remember to always use this, and all sources and methods, legally and ethically!

As I say every week… Do the right thing even if it’s the hard thing!

If you like these helpful tips, then don’t miss out on my free special report If You Want To be a Private Investigator Give Up… Unless You Do These Three Things. If not, you can get it right here…

P.S. – I am not an attorney and nothing here is legal advice. Duh.