“Unarmed” is not the same as “not a threat”!

When the media reports an officer shooting an “unarmed” citizen that instantly seems bad outside the context of the situation.

Understanding that basic concept is part of being an informed citizen who can participate in the discussion of police shootings and move society forward rather than getting bogged down in pointless online campaigns and ineffective hash-tag shouting competitions.

I’m not saying which side is right in any particular case… I’m just saying be educated and properly informed about the facts of a particular case before you wade in knee deep with an uninformed opinion. 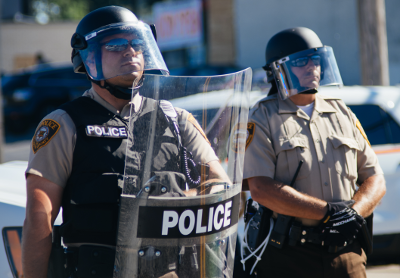 Are these Ferguson police officers wearing “militarized riot gear” or are they wearing the protective gear required by the department, and common sense, given the dangers of their job (the same as you might wear steel toed boots while working in a warehouse)?

On a practical day-to-day basis, when working as a private investigator or process server, being unarmed can make you seem like the more reasonable person in media accounts and may help reduce your liability if it goes to court!

Of course, being unarmed doesn’t mean you just sit there waiting to be a victim either! Keep your eyes open for anything that can be used as an improvised weapon of opportunity (either by you or against you)!

P.S. – Don’t miss my special report titled… If You Want To Be a Private Investigator Give Up… Unless You Do These Three Things. You can get it on the home page of my blog.

Are there any skill sets you can learn as a private investigator that won’t be out of date a year from now? Yes!

The fundamentals will always be necessary and especially surveillance!

A tracking device will only tell you where the vehicle went. It will not tell you if any passengers were picked up or where the person went after getting out of the car. Heck, it won’t even tell you who was driving!

Only a person (detective!) doing physical surveillance can learn this information.

That’s one really good reason why learning how to do surveillance (and do it well!) is a money maker!

If anyone tells you, “It’s all in the databases” or “You can learn it all online”, they are full of it!

Learn surveillance and take your marketable investigative skill sets to the next level.

In this video I also explain why few things are truly “game changers”. I use the 1966 US Supreme Court decision of Miranda v. Arizona as an example.

Committed to your success as a Private Investigator,
Larry Kaye, P.I.

P.S. – Don’t miss my special report titled… If You Want To Be a Private Investigator Give Up… Unless You Do These Three Things. You can get it on the home page of my blog.

I’ve got a huge warning today for anyone who’s selling a car online and for those who think they have found a website where they can run a license plate trace without having a legitimate, permissible purpose. 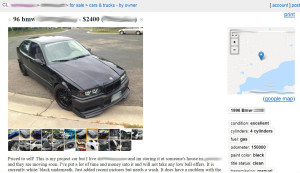 The license plate database scam relies on finding photos like the one shown here.

The photo above shows the type of ad the scammers are looking for. I redacted the license plate and some location data from the photo.

The scammers then place the information in their “online database of license plates”. It’s a small collection of plate numbers and associated addresses, but their goal is not to grow a large usable database.

What they do is contact the seller and tell them their license plate number, phone number and home address are listed in a database available to the public to run license plate checks, however there is a way to be removed from the database.

And here’s the shakedown… the person / victim who wants to be removed, can pay money (to cover the cost of modifying the database) and their private information will be removed.

So here’s how to protect yourself (and your clients)… Simply make sure if you have a car for sale online that the license plate is not visible in the online photos.

I want you and the people you care about to be safe.

Is this a message you should share with someone?

P.S. – Don’t miss my special report titled… If You Want To Be a Private Investigator Give Up… Unless You Do These Three Things. You can get it right here…

P.P.S. – Here’s the link to The Truth about License Plate Searches and a 1% Solution video.

Caution: Rant Ahead.
Subject: Don’t be “that guy”.

You know the one. He lives in his mom’s basement, has snack crumbs all over his shirt and pauses his video game long enough to troll the internet and say something stupid about something he has no clue about… specifically when he learns a private investigator secret and then says, “That’s just common sense”.

You especially see this when he learned the trick for free online because, when he gets something for free, he has no appreciation for the VALUE of the technique! He has no idea how much money you can make or how much heartache it saves a real P.I.!

On the other hand, if you’re sincere in your desire to learn (and if your reading this, I suspect you are!), then you understand that just because a secret “makes sense” once you’ve learned it, that does NOT mean it’s common sense! And it certainly doesn’t mean you would have figured it out on you own.

It sure would be nice if the trolls would be a little grateful when an experienced teacher shares something with them.

Don’t be “that guy”. When you learn a trick from someone who’s been there and done that, realize you’re learning money making, case solving, solid information!

Have you had an experience where someone undervalued what you did for them just because you did it for free? Let me know about it in the comments below.

P.S. – Don’t miss my special report titled… If You Want To be a Private Investigator Give Up… Unless You Do These Three Things. You can get it on the home page of my blog.